Looking Back in Time 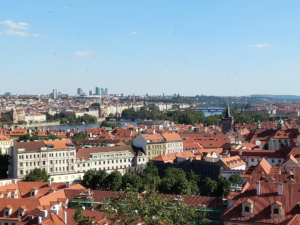 I just got back from a trip to the Czech Republic. Prague, the capital, is a beautiful city and a big tourist attraction. I was last there 29 years ago, just a year after the people of the country threw off one-party communist rule and became democratic for the first time since World War II. What a change.

It was very exciting to visit in 1990. The people were celebrating their freedom, happily demonstrating, even carrying around copies of the US Constitution translated into Czech. I could still feel the decades of its communist past, however. The market economy was very tiny with only a few stores. We stayed in an apartment in a big Soviet-looking apartment block surrounded by expanses of bare ground. There was no toilet paper. The food we found in a restaurant was edible but not enjoyable. And yet, there was an optimism you could feel.

I was curious to see what it would be like now, 29 years later. I was struck by the number of western stores from Subway to Gucci tucked away in historic buildings. A Lamborghini sports car drove past us on our first day there. The food was terrific. And there were many tourists. I kind of missed those days years ago when we could get a good picture in front of different tourist attractions because we were some of the few people there. But I was very happy for the country. People were busy with their lives. Things aren’t perfect. In fact, there were demonstrations there this summer protesting the president who has been accused of corruption. But the demonstrations were different. No one was afraid of a heavy-handed police crackdown. There was no fear of an invasion of tanks from another country. As I navigated around crowds of tourists to see the attractions, I marveled at how much a country can change in 30 years.